Using a old pizza pan I created a false bottom in the tun to allow the wort to drain out the bottom of the tun while keeping the grain in place. Cutting the pan in half and placing hinges on it allows me to fold the pan in order to fit it through the slightly smaller hole in the top of the keg. You can also see here that the keg is insulated with a foil thermal barrier. 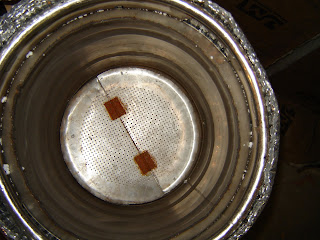 The wort drains out through a gate valve in the bottom which then leads to a magnetic drive pump that moves the wort upward through the heat exchanger. 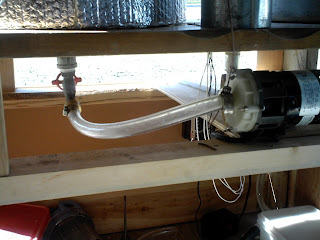 This lid fashioned from styro-foam limits the amount of heat escaping from the opening at the top of the mash tun, and once the grain and strike water is added there is no need for stirring since the pump circulates all the wort keeping the temperature even. 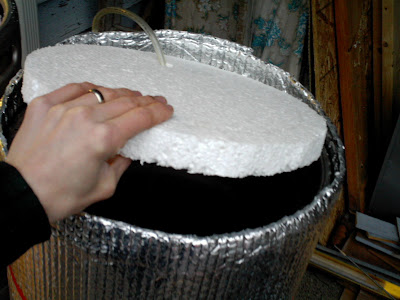 After passing through the whole the wort flows through this tube and ends back at the surface of the grain bed. This sparge-arm rests on the top of the grain bed and evenly disperses the wort across the surface to ensure an even flow downward. The stainless steel ball is a float switch which I will use later to regulate sparge water dispensed from a sparge tank using a solenoid valve controlled y this float switch. 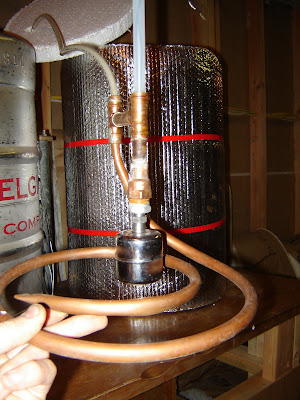 You can see here my kettle. At the bottom is a stainless steel screen that I use to strain out hops and hot/cold break that forms during the boil and cooling. The dip-tube which goes to the ball-valve on the side goes below the screen so that all the wort must pass through it in order to exit. The heater element you see here is a beefy 4500 watts and one of the primary limitations of my design of this system. While it is on I cannot have any other systems running or I will surpass my maximum load for the wiring and the breaker itself (4500W / 220VAC = 20.5A). It is on a 20A break but I believe that we will not actually be running at the rated capacity and that the breaker probably trips a ways beyond the rated mark. 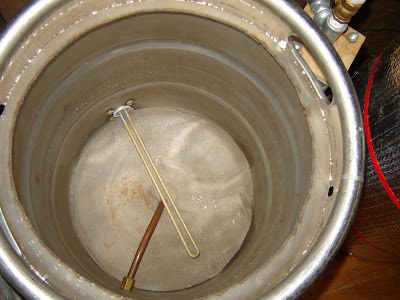 The heater element is wired in and the hot 220VAC wires protected by a plastic cover. 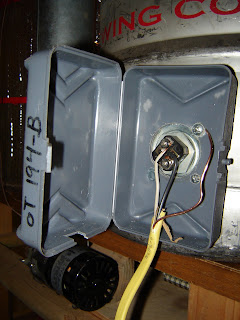 The boil pot needs to be able to freely boil off sulfides which are in solution in the wort so it should not be completely covered. This little number allows the kettle to vent while simulateously redirecting the steam elsewhere. I may or may not use it. :) 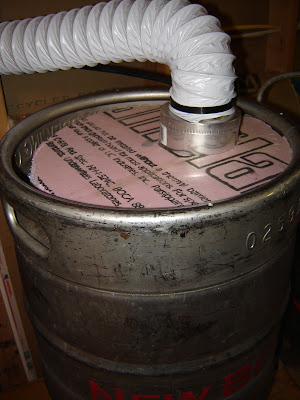 Because this element draws so much power it was nigh impossible to find a switch that could trigger it... I finally found this relay on eBay. It is for industrial applications and has some silly rating like 500Amps at 440VAC. The coil is actuated by a simple 110VAC current though... slick! 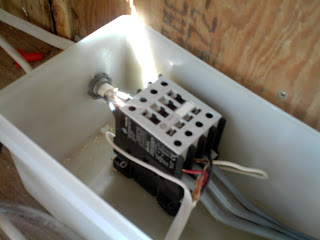 These are the basics of my brewery and are unlikely to change for some time. Once I get some pics of my new setup I will point out where they have gone to. :)

Pour one for me,