I would like to chronicle the beginnings of my almost six-year ordeal here... (ughh... well I did take it apart and put it back together a few times). Building a brewery is much like writing a blog post... I write a little bit, then decide that it's not exactly perfect (or perhaps just "less than ideal") and I am compelled to purify it, to improve it even if it means backward progress.

My initial dreams for this brewery began with thinking that there must be some easier way to control the temperature during the mash... let me back up.. 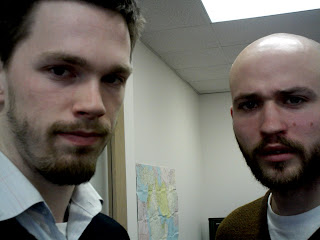 Tyler McPherson and I first endeavored together to brew our own beer about the same time we moved up to Seattle together after having lived in Redding during college. There are basically two ways to get started home-brewing. One, you begin with extract created from the mashing process, whereas in the second method you perform your own mash on some kind of malted cereal grain (we can get into the mashing process later but it is the major difference between brewing from extract in the first method and brewing from all grain in the second method). The first method is a bit simpler but forfeits some versatility in your absolute control over every aspect of how the beer comes out. I know it was dorky and certainly a bit snobbish, but I can't help be a little bit proud when I say that we completely bypassed the first method, where most brewers begin, and went directly to all-grain. Huzzah!

So mashing involves about 20 pounds of grain in a cooler with warm water so that the enzymes in the partially germinated grain seeds are activated and begin their conversion of starches and proteins into sugars. It gets kind of tricky keeping the grain bed uniformly at 158 degrees.. you need to cool it so that it does not develop cold spots which do not convert properly, but each time that you stir your temperature drops significantly. Increasing and even sometimes just for maintaining temperature requires the addition of small amounts of boiling water to the mash. 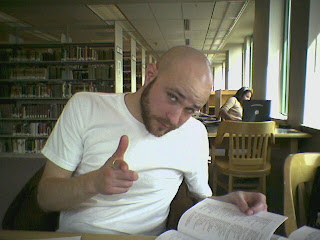 I got to thinking about this once we had brewed a couple of batches and asked my fellow zymurgist and asked him whether he though we should attempt to create an electronically controlled system which would monitor the temperature and automatically adjust by us of some kind of heating device....

Best to do this in some way that will not scald the wort. If any part of the sweet-wort gets over 170 degrees Fahrenheit it becomes sticky and will not rinse (or sparge) from the grain-bed of the mash... a delicate problem with several solutions, but only one was 'ideal' (at least until I think of something better). 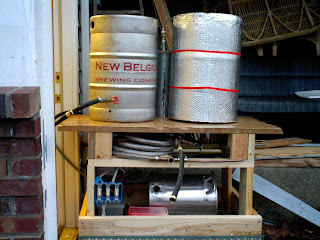 It is a "Recirculating Infusion Mash" system, which means that the liquid that the grain rests in during the mash process, or "wort", is constantly recirculated out through the drain in the bottom and then pumped back into the mash tun again and dispersed on the surface of the wort until it is recirculated again. During its recirculation the wort temperature is monitored and heated by a temperature sensor and three induction heaters clamped onto a copper pipe which infuse the wort with heat when necessary. You can see the channel by which the beer is heated while on its way back to the top of the mash tun again here: 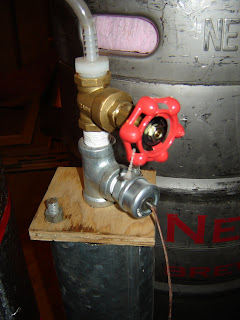 The sweet and yet-unfermented wort is pump from below into the silver-ish heat shield that you see below where the heater elements are housed, then past the thermocouple connected to this wire by which the temperature is detected. And finally the gate valve is simply there to control the rate at which the sweet wort flows through the system (See Below), if it moves to quickly you can plug up your drain on the bottom of the mash tun. 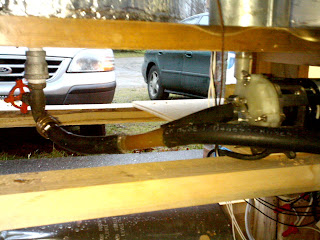 This allow the wort to flow freely while leaving the grain bed behind in the mash tun.
by Unknown