Mashing is the process of converting grain into sugar through the use of some kind of malted grain. Malting is essential to mashing and is done by cultivating barley seed to begin to sprout, by placing it in a warm damp area. When the seed begins to sprout it releases enzymes to create sugar from its stores of starches surrounding the germ of the seed. These enzymes become inactive when germinating conditions are poor and are not a living part of the seed, but rather a chemical process. This means that once these enzymes are released at the beginning of the sprouting process the barley can be roasted in a kiln just enough to kill the seed itself and the enzyme will not be harmed. This is where we get different types of beer that have different levels of "roastiness". A stout is not necessarily any stronger that other beers (usually they are weaker), rather they use malted barley that is simply roasted longer in the kiln.

Mashing then, is simply the process of re-awakening the enzymes in the malted grain so that they begin to convert the starches and proteins into sugar again, but this time when the seed is no longer alive to use the sugar for growth. When mashing, it is important that the temperature remains high enough to facilitate a good conversion of the starches and proteins into sugar, but not so high that the sugars already in the water get caramelized and become sticky. The magic number here is 170 degrees F and it is crucial that you do not go over it.... The ideal mashing temperature is usually around 158 (there may be steps at alternate temperatures to encourage different enzymes to condition the mash differently depending on the style of beer), but once the process of conversion is complete, it is good practice to raise your temperature as high as possible, without going over 170, so that the sugars rinse from the grain more easily when drained from the grain bed. When you are draining the sweet wort from the lautering tun it is called "lautering" (what a shock) and if you go over 170 the sugars will stick to the grain and be left behind in the tun while if it is not hot enough, it will not drain easily and will also get left behind on the grain as the water drains. Another factor when lautering is that as the wort drains, the grain which had been suspended in the water, begins to compact under it's own weight and can actually plug up the holes in the bottom of the tun stopping the lautering process.

These two factors make it prudent to slowly add hot water to the surface of the grain bed... water that is at or jsut under 170 degrees... This hot water does not tend to mix with the sweet wort (if you add it carefully) and accomplishes three functions:

I have constructed a sparge tank which will use a temperature controller to heat hot water to 170 degrees F (See Below). 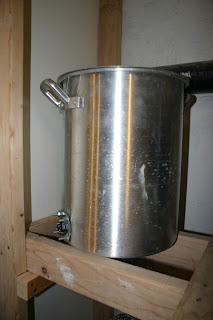 It has an electronically actuated solenoid valve on the bottom which will be triggered by the float switch on the sparge arm (See Below). 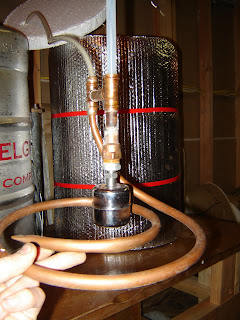 The sparge tank will be place directly above the mash tun and during sparging will be activated so that it keeps the water level at exactly the line of the float switch on the sparge arm. You can envision where it will go (See Below). 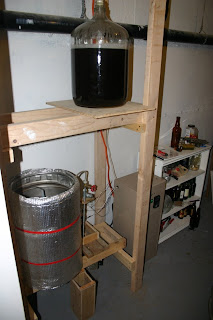 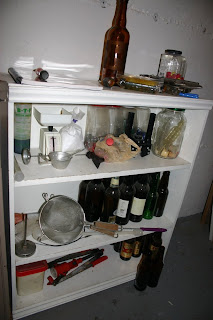