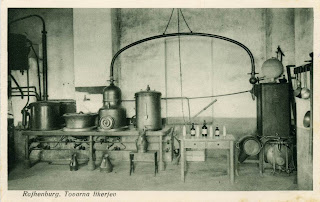 Some of the Germanic tribes of ancient Europe had a custom worthy of discussion here.... The leaders of the tribe would get absolutely gargle-blasted on mead or beer, and the discussion regarding the decision at hand would begin. More than this, it would begin without any semblance of guile, deceit or any thought more complex that can be mustered by a five-year-old. The point of carrying out this exercise of drinking prowess is not because everyone knows that making decisions while drunk is a good idea (in fact the actual decision itself is not made until the elders of the tribe get together the next day, after having recovered from their hangovers, to reason out their best options). The point, rather, is that there is some degree of liberation in inebriation. When people are laid bare by life's toxic contamination, when their composure is worn by its coarseness, the will and desire of their most inner being is made manifest. They are made naked...

Why is this important to decision making? Because when we are frank and honest with one another, we are free to conflict, clash, and contradict one another, but this is the very essence of encounter. Because no two entities are alike, their meeting is essentially a contrast of two forces. Two things which are essentially "other" than one another must also come to terms with one another. They cannot become synonymous without losing their own distinctiveness. When we encounter our true selves and allow others to encounter that person as well, only then can two people progress into an antiphonal point and counter-point; only then can they create harmony and dissonance. Even the terrible grating clash of awkward destruction becomes part of the universes unfolding... part of its destiny... and in that collision new life begins.

Now, as I have said earlier the actual working out of these two forces is not done drunk, but having come through their unraveling together, mutual knowing becomes possible. God gave us beer to teach us about ourselves and others... we may not like what we see, but we must consider that fact that whatever is there is precisely what God deemed worthy to lay His own life down for. I'd say that obligates is to love ourselves unconditionally, expecting nothing from ourselves and hoping everything for ourselves.

My wife wrote this... she is a genius and I think that this was an inspired saying and should go on the side of a bus:

dear jesus,
thank you for paychecks.
which will turn into wine.
turns out you still perform miracles.

-Pour one for me, my others
by Unknown

Email ThisBlogThis!Share to TwitterShare to FacebookShare to Pinterest
See more posts about: philosophy