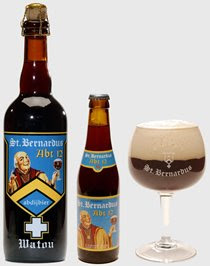 We are determined to re-create that blessed nectar St.Bernardus Abt. 12. But it can be tricky re-producing a centuries old secret tradition long held by God's own elite brewing force...

We did some initial research but all we found were clones of Westvleteren Abt 12.. problematic since that is a different and lesser beer altogether.

But we are unabated and ambitious. Surely God's goodness and mercy will be laid upon the deeds of those who are pure of heart. I was intrigued to find this quote from the beer critic, Michael Jackson (not that Michael Jackson).

"Only pale malt is used, with white and dark sugar. The first runnings from the mash tun go to one kettle, to make a strong beer, the second runnings to the other for a lower-gravity brew. It is a very traditional method. Northern Brewer hops are used, and Westmalle yeast."

So here is what I came up with so far...

I feel like I might revisit the yeast situation and although it is apparently very traditional to only use base malt and sugar adjuncts, I'd feel so much better with some other malts in there...

Email ThisBlogThis!Share to TwitterShare to FacebookShare to Pinterest
See more posts about: brewing