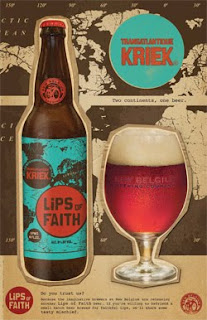 One of the best "beers" I have had recently is from the "Lips of Faith" series from New Belgium Brewing. It is well-balanced and reminiscent of a really, really good rosé. The cherry-flavo(u)r is not sufficient to make it overly sweet but just adds a warming rounded flavor. I bought this beer a second time wanting some of my friends to try it and I can foresee myself buying time and time again as it has tremendous potential in the food pairing arena...
The point is not that beers with adjuncts like fruit, herbs or other grains are invalid. Merely that such beers have their own, independent place in the world separate from beer. There are times when you want wine... times when you want a martini... times when you want a heather ale, and then there are also times when you crave delicious-velvety .... pure beer.
~the saint
Joel asked me to write this little appendix.
The Reinheitsgebot could be compared to learning black and white photography before moving on to color. Or the same could be said for learning to work with film before making the switch to digital. When you work solely with black and white, you are completely focused on the very basic tenets of photography. You are working with depth of field, aperture, shutter speed, composition, contrast, motion, etc. Not to say that these don't play a part in color photography, but they are so much more critical in black and white. Similarly, when working with film, knowing exactly how your camera works (not to mention the type of film (and I'm not just talking about ISO!!!)) is absolutely essential to creating the image you want to capture. So much more is involved in seeing the image you want to capture before you ever click the shutter. You can't just shoot 36 frames and say, "Oh, that one looks good." You should be able to shoot 1 frame and KNOW, "That one is the one."
We receive so many opportunities in life to take shortcuts or step beyond the boundaries of what we have learned. Some people might be okay with that. Some people are fine with not knowing how an internal combustion engine works, but only that their automobile accelerates when they depress the gas pedal. There are some people, though, who value the foundations. People who appreciate the basics enough to take the time to master them, so that they intimately know every step of the creative process they are embarking upon. These people are truly Masters of their craft. Those who have been tested by the fires of Reinheitsgebot and passed through (most likely quite scathed), are, in my opinion, the better for it. They are the sages. They are the ones who will write the future books on brewing that homebrewers will trust as their brewing Bible. They are the ones who are usually passed by with a scoff in life, but revered after death for their knowledge, love, and intimate relationship with their craft. Amen.
~the zealot
by Unknown