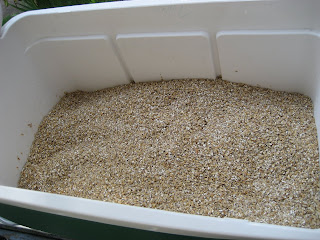 1) Cooler for a New Mash Tun - Over the last couple of batches we began to assess that the current mashing situation (though extremely cool technologically speaking) was actually quite inefficient and was losing heat nearly as fast as it could add it back into the mash.  It discovered that by turning the recirculating pump and heating coils off we could actually maintain temp better simply by covering the mash with at lid.  This was disappointing but along side the fact that the 220VAC heater coils also created electrostatic build-up which could deliver a smart shock we judged that it would be more reasonable to be a little less "cool" and simply revert to the age-old method of cooler mashing.  This, of course requires a cooler... a big one.  Too large and we would not have a deep enough bed to properly filter the wort.  Too small and we would have no option of brewing heavy ales which require large grain bills.  I estimate that 70 - 120 Quarts to do us right, and preferably something right around the mean of the two. 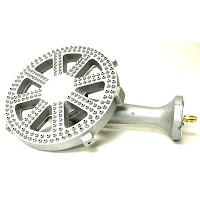 2) Propane burners - Just at the moment when we finally had two working full-220VAC 4500W kettles (one for boiling and one for the hot liquor tun) we also discovered our mash problem.  As I determined to removed the 220VAC heater coils from the system I realized that there was also no reason to keep using 220VAC for the kettles.  Not using electricity affords catholicbeer three things: firstly, it is less dangerous in the arena of large spills, and second it becomes completely portable, and finally, it also becomes easier to repair.  Admittedly, we don't actually "need" this to continue brewing as our current kettles work just fine, but I am inclined to make such major changes all at once (I'll leave it to Brian to temper my idealism so that we can brew as soon as possible).  ;)

3) Portuguese Floor Corker -  I don't need this at all, but it would be really cool... so cool in fact that I am bumping it up to 3rd place.

4) Steel Brewing frame - Our current frame is made of wood..  now this would be fine as long as it were easy to sterilize, but we recently had an outbreak of mold which mean mold is very likely on our equipment... embedded in the wood grain itself.  Steel would be much safer and easier to sanitize.  Fortunately I will soon be in possession of a welder and a torch set for brazing.  :) 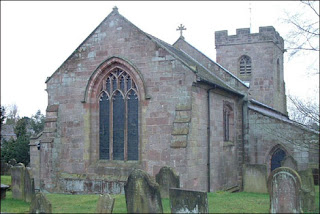 5)  New Location - Related to #4; our current location has little or no ventilation and it is difficult to clean.  A new location would be ideal... one where we could hose off the floors and keep things more clean.  Ideally an abandoned church whose steps have been worn-down in the middle so as to no longer be level with the sides; a result of hundreds of years and thousands of pilgrims in search of meaning and peace.
by Unknown

Email ThisBlogThis!Share to TwitterShare to FacebookShare to Pinterest
See more posts about: equipment, other stuff