The USA takes on all those "other" countries ...in Beer Consumption ...(not shabby, but still gets her ass kicked)

Thought I'd expand by scope a little.

First place for beer consumption per capita is... yep.  the Czech Republic.  Wait did you just say Czech Republic???  Yes I did.  That little region wedged into Germany's armpit?  Yep.. They consumed 156.9 Liters a beer a year per capita (to put that into perspective US consumed 81.6 L).  I am now thinking that if the Czech Republic spent as much effort on science as they spend on beer, they'd have invented teleportation by now.  Wouldn't that be awesome!?  I could live in the mountains of Alaska and pop over to Bengaluru for a quick bowl of aloo gobi and then go catch the opera in Sydney).  Damn you Czech-Republicans!

Next up are the Irish... man those Catholics can drink...

Germany... again not too surprising. 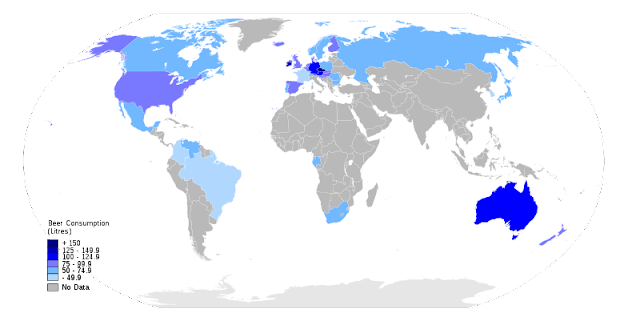 Email ThisBlogThis!Share to TwitterShare to FacebookShare to Pinterest
See more posts about: about beer, market research