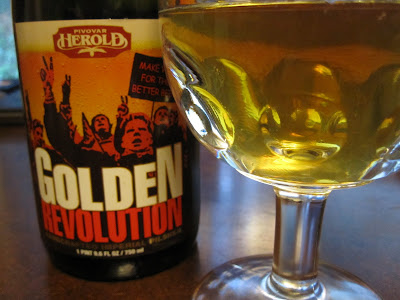 If your looking for a great imperial pilsner from the Czech Republic that was brewed in cooperation with Sam Calagione and the Dogfish Head Brewery, look no further... Even though I am sure this glass is not the preferred vessel for this style I was very much impressed with this beer.

Firstly the association with the Dog Fish Head brewery should not be taken lightly nor will any high expectations formed by knowledge of this beers aforementioned association be disappointed.  Golden Revolution pours golden with just a little bit of head (I personally don't prefer foam in the way of my beer so it might be that when you pour your own... or one for me... that the head is much increased).  The aroma reminds me of a kind of lavender honey.. maybe some sweet clover in there.. and also some nutty warm flavors.

The beer though sweet was perfectly rounded out with a hopped bitter edge that place it in my mind somewhere close to Pliny the Elder (yes, I just made that comparison) though not quite so hoppy.  The beer doesn't say anywhere what the ABV or gravity is.. but if I had to guess I would place it about 8.5 - 9.5 % with a good balance of malty gravity which makes you second guess just how alcoholic it really is.

I would like to place this beer in a side-by-side comparison with Pliny and maybe some others like Duvel... The whole concept of imperial pilsners echoes Belgian style ales such as Duvel but this Czech beer certainly stands on it's own being much more heavily hopped than most Belgians, but still remains outside the normal realm of the "everything-is-an-IPA" style which Dogfish Head  and Stone are partial.  :)

Cheers you crazy Czech's!
by Unknown