Lookin' for some tasty alternatives to "beers" sold in corporate greed and political nonsense? 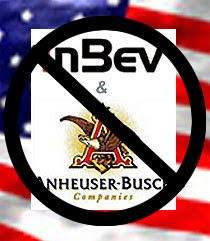 
Bass => Tetley's
Bass is a rich buttery pale ale. If I had to identify something similar I might try Tetley's.

Boddingtons => ???
[UPDATE 2/24]  I am an idiot.. this is most certainly NOT a cream ale (which is actually related to American lagers).. Apologies all.  This would be considered, rather a bitter I suppose.. try replacing this one with the dreaded Tetley's as well.  ;)   A typical British Cream ale. Try... jeez, nothing comes to mind.... hmmm... Well I guess you Cream Alers are S.O.L. ;)

Franziskaner => Josephs Brau or Trader Joe's
A line of German Weissbiers. Trader Joe's actually carries a beer called Dunkelweizen from Joseph's Brau and another one called Vienna which is their own brand (Trader Joe's).  Both are quite tasty.

Hoegaarden => Avery's White Rascal or Unibroue's Blanche de Chambly
There are so many great Belgian witbiers (aka White Ales), that there is no reason why you should lament this one... aside from the fact that it is much more readily available. :(

Spaten => Celebrator
Another tradegy. I always loved optimator, but that is not to say it was the best Dopplebock, it just had sentimental value. Try Celebrator (a little more roasty but if your already drinking Optimator, I have faith in you).

Stella Artois => Red Stripe or Le Chouffe
Yep. Face the facts people. Stella is the Budweiser of Belgium and I don't taste much difference between the two. Try Red Stripe or better yet move on to something like Le Chouffe.  :)

If you like any of the other beers on that list besides the above... for God's sake try something else. ;)
by Unknown