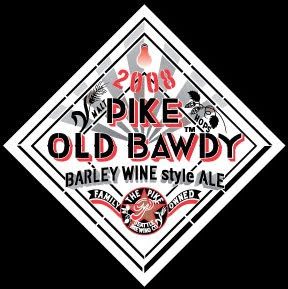 For our Monday tasting we have done two beers this week:

The first is "Old Bawdy" by the Pike Brewing company under the supervision of head brewer Drew Cluley.  This is a barleywine style ale with a prominent hop character balanced by sweet caramel flavors.  It almost reminds me of a Scotch ale but with a different yeast strain.
Second up was "Old Viscosity" by Port Brewing company.  Tomme Arthur heads up the Lost Abbey operation and is a greatly decorated brewer known for his work both at the Port Brewing Company and now also at Lost Abbey.  Old Viscosity seemed to really go out of their way to not define what kind of beer it was except to say that it was thick and syrupy.  To me is was an Imperial Stout as simple as any I've had, but I am sure there are plenty of folks out there who would love to jump on a style debate.  ;)
Feel free to chime in!   Here's what we thought...