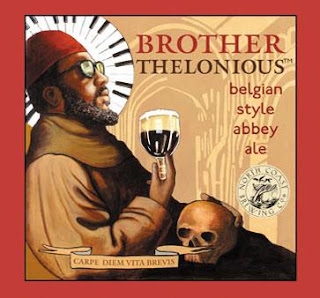 Our goal for Beer Tasting Mondays is to give you familiarity with various beers that you may not have otherwise tried.  Brian and I actually discussed how to approach this.. do we show only the videos of tastings of beers which we really liked??? or should we rather taste as many as possible and give as unbiased a review as possible.  We decided that primarily our goal was to get people to try new things and branch out from what is familiar.  That is why we decided to include beers that we know and love along with beers that we have never before tried.  Hopefully we will end up with a balance that will server both as as a way to familiarize people with beers they may have never heard of, as well as act as a recommendation list (mostly).
Brother Thelonious is one of those which we drink quite often. It may well be in our top 5 most frequently purchased beers, and this is due primarily to its availability in our area.
You can expect more of these favourites in the future.  Let us know how you like them!
Cheers and pour one for us.
the brewthers.
by Dutch