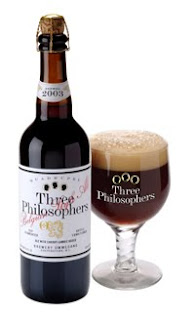 Today we do yet another beer from the Ommegang Brewery in Cooperstown, New York.  All the beers from Ommegang are aged at the brewery before they are shipped out.  Three Philosophers is their quadrupel and features a dash of kriek to it to add a little sourness and flavor to the beer.

I would be very curious to know what is involved in brewing the kriek which they add and specifically if the beer is filtered once blended with the quadrupel.  The addition of lambic yeasts into the mix could prove interesting when trying to maintain the overall character of the intended beer.

This beer is a solid quadrupel though perhaps not something you might like to start drinking if you haven't had many beers with a sour "edge" to them.