...because everyone should try 'Category 23' beer 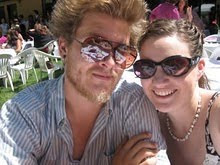 I first encountered the idea of puting wine in beer when Andrew Kooy tried it in his abmonination, "Rasputin's Tasty Bastard."  since then I have been seeing more and more of this idea.  Today I was reading through some older posts and noted that Joseph Lemnah had done something similar.  Mark Dredge from "Pencil and Spoon" also wrote about a beer brewed with merlot grapes from Cantillon Brewery  called Saint Lamvinus.  It is aged in Bourdeaux barrels for six months!

This is an intriguing idea... I wonder how long it has been around???  I am sure I am only now noticing it, but cheers anyway to Category 23 Brewery for introducing me!

Pour one for me,