What makes different kinds of beer? 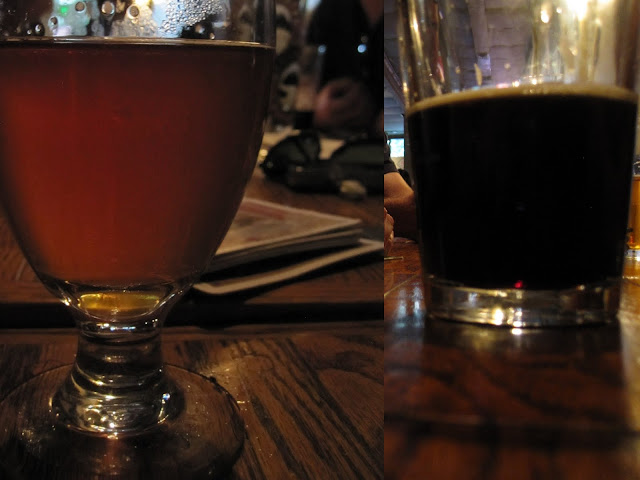 Understanding what makes beer taste and look different begins with understanding what is in beer.  The color of beer is often mistaken as a correlative of its "strength" or gravity, but in actuality very light beers can be very dark in color and vice versa.  For the most part color is an indicator of how much the barley was roasted and not related to how strong the beer is.

By strength of the beer I mean its gravity, which very literally is the weight of the beer in relation to its volume.  High-gravity beers are that way because they begin their fermentation process with a very low proportion of water to a very high proportion of grain and other fermentables.  The end result (depending on the yeast) is usually a increased alcohol level but can also mean a very sweet tasting beer.  For example, Guinness while being very dark is usually only 4.2% alcohol here in the US, while Duvel (a very light golden colored ale) is a whopping 10% alcohol.

Hops were originally added to beer as a preservative, but over time beer drinkers began to appreciate its bitter citrus/pine-like flavor.  The degree to which hops will bitter and potentially overwhelm beer is proportionate to the beer's gravity.  High-gravity beers often can have relatively large quantities of hops without making the beer harshly bitter.  Lower gravity beers are more sensitive to hop additions and a relatively small amount of hops will bitter the beer to a greater degree.

Yeast plays an enormous part not only in how the above components combine but also will contribute its very own character and flavors to the beer.  There are additionally many factors that determine how one single yeast strain will behave such as temperature, ratio of fermentables to water, presence of oxygen and many many other environmental variables.  There is enough material on this topic to cover a lifetime of blog posts but for our purposes here it suffices to say that there are many kinds of yeasts and they all have their own character.

Pick any yeast on this page and note the different flavors and behaviors that a brewer can expect from each.  It is a vast world with nearly endless possibilities.  In my opinion, the science of brewing centers squarely on knowing these little critters really well and caring for them so that they in turn can care for you.