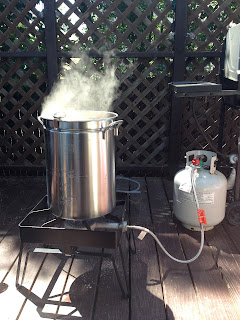 Hey, that's not Washington!  Darn right- this is California.  You'll also notice the fabulously shiny brew kettle and the pristinely clean burner provided to the Zealot by the Saint specifically for brewing in the fairer state.  I thought it was about time to brew an all-grain batch after my successful attempt at a Scotch Ale extract back in August.  I had lofty hopes of creating a Rochefort 10 (probably my current favorite beer) clone, but decided to scale back and landed at Dogfish Head 90 Minute IPA (definitely not my favorite beer, but I though it would be a nice "end of summer" refresher).  For the recipe, go here. 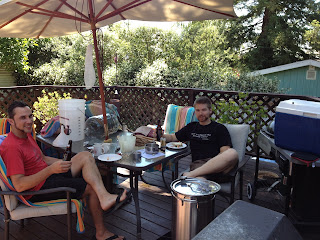 I had help from Ben who proved himself invaluable once again.  The only hiccup was a little troubleshooting during the mashout and a stuck sparge.  We finished off my Scotch Ale (yum) along with a Stone 2011 Vertical Epic and a couple others... 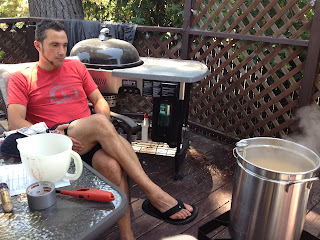 All in all- great brew day.  Hope you can join us next time.