Are you kidding me?! 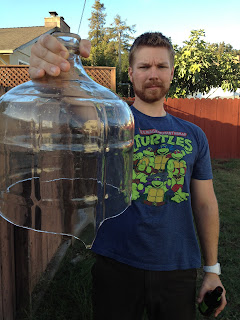 "Are you [expletive] kidding me?" I said this phrase over and over as my cousin Matt and I tried to salvage what was left of our hours of hard work (and about $60 worth of ingredients).

It was beyond time to brew again.  My phenomenal Dogfishead 90 clone was almost all gone and I was restless.  I dug up an old recipe on The Abbey for a Samaranth clone that we never brewed.  I took it to the wonderful people at HopTech and they helped me out.

My cousin Matt came over for the brew day and lent a helping hand.  He's fresh out of the Navy and eager to brew. 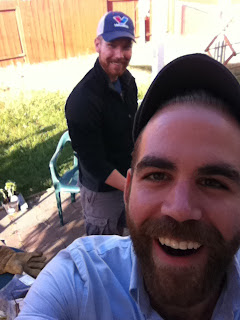 The carboy disaster occurred during the cooling.  Let me first just say that I realize you are not supposed to cool hot glass too rapidly nor are you supposed to warm cool glass too rapidly.  I realize that, but I did it anyway.  I have done it before with my carboy, and never had a problem.  Well, I guess  it was finally too much.

We had placed the carboy full of hot wort into an ice water bath in a big rubbermaid.  About a third of the way filling the bath, I noticed that my carboy was looking more and more empty- never good.  I grabbed the neck and lifted half of my broken carboy out of the soup.  I almost cried.  But I quickly recovered.  I would not go down without a fight.

I picked four large sections of my broken carboy out of the watery wort.  They were clean breaks- no fragments or shards.  I poured the entire rubbermaid back into my boil pot (which was more than the pot could handle now that there was so much more liquid).  I then boiled the crap out of that thing (I picked out a few leaves and such first). I must have boiled for five hours in order to evaporate out all that extra water until I got back to the five gallon batch that I started with in the carboy.  I also wanted to make sure I killed anything that may have tried to feast on my sugary concoction whilst it was stewing in the rubbermaid.

In the meantime, I went to my friend's birthday party, borrowed a brew bucket, had several beers, and went back home to my mess.

Now, my "beer" is bubbling away.  I have no idea how this will turn out, but I'm hopeful.  And if it ends up being delicious, I will feel like the baddest of all asses.

Pour one for me.
by Dutch