Last Friday was memorable.  My buddy Matt wanted to brew an Imperial Stout, so we convened at Hoptech and the wonderful folks down there set us up with their house recipe.  We even got to try a sample of a fascinating sour IPA that they were working on.  Back at my place, we started Batch #023. 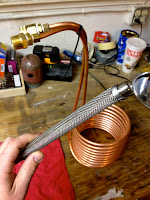 I had picked up a few toys and fashioned one of my own for this brew.  A much needed wort chiller (no more ice baths!) a false bottom for my cooler (no more stuck sparge!) and a brew paddle shaped from a 1x4 that I had lying around (badass!).

Eddie showed up next, then Luis then Keith, then Wilson, then Chris and Dannica, and before you could say reinheitsgebot, we had a party on our hands.  Three pizzas, a blown keg, and more than a few cloves later, we had the beer sitting pretty on top of my fridge ready to bubble away.